The Farm in Spring

A blog of passing thoughts, and wordily melodies, of grammatical knots and writing reveries

This week’s Weekly Photo Challenge is to show one shot, in two ways. With this information on hand, I got in a few shots when I went to the Cincinnati Zoo specifically for this challenge 🙂 I will absolutely do a full zoo post tomorrow or so with more photos!!

Little blue lights at night that float around, mostly after I’ve listened to music, and always  when I’m half awake. This is a tale of the most questioning time that this has happened and I’m still spooked by it.

Women have been known to have their intuitions, but not like this.

In March of 2010, I was attending The University of Alabama and stayed in the apartment dorms named “The Highlands.” With three other apartment mates, I’ve always felt safe and I would just go day in and day out attending classes, grocery shopping and laundering clothes, with spurts of homework and studying.

One night I awoke with a strange feeling, as if I were still dreaming. I looked up in the usually pitch dark room and saw what looked like a tiny blue pin light on my wall. As I stared at it, it began to move in a slow sweeping movement. I could see it was spelling something in cursive, and it was “James.” Since I was half asleep, I just went back to sleep as if it were a natural occurrence of the mundane. The next day I recalled the dream, and since I know absolutely no one (nor to my recollection remember meeting any one) named James, I told my mom about it to see if it sparked anything in her memory. It didn’t. Chalking it up to the weird and whimsical, I forgot about it and went on with life.

Now, occasionally all of my roommates would go home over the weekend (as we all had family close to the area, it happened often) but I had decided to stay. I had homework and studying to do that Friday evening… I also had some programs I wanted to watch on TV, but I digress. Deciding on ordering a nice pizza and a soda, I tuned on the TV… uh, I mean took out my drafting table… and got to work. A playful tune on my phone reminds me that I indeed have a working landline, and I pick up for the voice of the pizza guy. He’s lost. Naturally I give him the best directions I could, and upon still being navigation-challenged, I went outside and waved my hands around asking him to look for me. He found me. I wish he hadn’t.

It was nice to finally have my pizza as I relaxed to wind down my day. The phone rings again; huh, strange… nobody ever calls me on my landline. It’s The Pizza Guy.

“Hey, uh. I just wanted to say I’m sorry for getting lost.”

“So how did you like your pizza? Was it good?”

“I just wanted to talk to you again and say that, uh, you know, uh, I like your style. I haven’t seen anybody around like you. You from here?”

“Oh okay, okay, that’s nice. Yeh, that’s real nice. So I was wondering if I can call you aga—”

“UMM. I kind of have some homework to finish. So I have to go! BYE!”

With my heart racing and my head pounding from an quick oncoming migraine, I pulled the landline out of the socket (thank goodness I didn’t list my cell, right?) I was truly scared.

I called my mom, who lived in a COMPLETELY different state at the time (good thing I have family members in Tuscaloosa.) After she’s done freaking out, and made sure that I remembered to lock all the doors and windows, she contacted my family there with me in alabama. They took action. Lucky for me, one of my aunt’s best friend is the manager at that particular pizza business and the matter was resolved.

A couple nights later, I was talking to my mom about it and she was telling me how they dealt with the situation.

“They confronted him about what he did. Apparently he’s done other things before and received complaints.”

Yes I was concerned that I didn’t want to make him angry and get him fired.

“No, I’m not sure what they’ll do with him, (Insert Aunt’s Name Here) said that James didn’t know that he was on a college campus.”

I began to exclaim that it shouldn’t matter that I was a college student, and that someone that old and raggedy, or ANYONE, shouldn’t be calling customers at their home like that. Then we went on about other things, and my reassuring conversation ended.

A few hours later, and deep in thought, and shock, I text my mom.

I know I haven’t been on here… well… at all, but hopefully I can find a muse to write more. I’m doing camp nanowrimo again this month, so here’s hoping the writing bug will latch on and put me in an inspiration fever. Crossing fingers, eyes and swords!

A drink before the war , and then there were none.  Their eyes were watching God , bright young things , body of a girl . A lesson before dying.

located at my book site: NovelReveries.com

My dog, Shay as the test subject

The weather outside may look peachy keen,
but inside my soul has been set aflame
by the lightning of the storm that deals out rain
in waterfalls that flow into the river of my veins.

Oh my weak heart that’s worn out from constant pain.

I suppose I do get weary.

I get weary of the advice from others thinking they can save me from the ache,
thinking that lectures they read somewhere will guide me in the right direction.

and man do I get weary.

But I’ll smile that smile, nod that nod and laugh that laugh to keep it all down.

I’ll keep it down until it drowns in that river
Or until it burns out into ashes of black and silver.

Granted, I set my word count goal to 25,000 instead of the 50,000 required for regular Nanowrimo in November, but still… I achieved something, haha! I’ve decided that it feels great to set a (realistic) monthly writing goal and surpass it, so I’m going to make it a regular thing. Perhaps 5,000 words a month? Possibly more, it depends on my mood. Well, I just thought you all wanted to know… even if you didn’t, here it is anyway. Have a great week!

Cheap deals on Kindle books that include Angela’s Ashes, Neil Gaiman, Sandra Brown, Sherlock Holmes and some great YA, Children’s and Romance books! 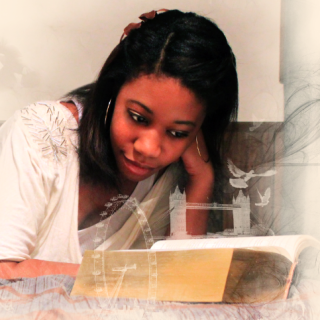